We use cookies to ensure that we give you the best experience on our website. If you continue to use this site we will assume that you are happy with it 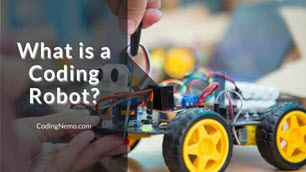 This post may contain affiliate links. Read the disclosure for more info!

Robots are fun to play with. But do you know it could be a great educational tool as well? What is a coding robot? I decided to find out.

A coding robot is a type of STEM toy with the ability to process data, perform cognition, and plan actions. It is usually equipped with sensors, memory, and a processor. Kids give instructions to robots by creating computer programs.

In the remainder of this blog post, we will look at what is a coding robot, how can a robot help to teach kids to code, and what are some best coding robots for kids.

What is a coding robot?

A coding robot is a programmable toy. Users (usually kids) can write a set of instructions to control the robot.

Robots are designed to encourage kids to code in the form of playing. A computer program is essentially a set of instructions we give to a computer or robot. Kids learn and apply coding concepts to control robots.

Robots are not just for play. It has been widely recognized as an effective teaching tool. From early childhood education to high school lessons, robots are used for STEM education. STEM stands for Science, Technology, Engineering, and Mathematics.

What programming languages can be used to program a coding robot?

Numerous programming languages could be used to program a robot.

For kids or new coders, Scratch, and Python are the most popular options. Most kids’ coding robots can be programmed by these two languages.

Scratch is a block-based programming language. Kids can program a robot by dragging and dropping coding blocks.

For advanced coders, C++ is one of the most popular programming languages for robotics.

These are not the only programming languages that can be used to code a robot. For learning coders, from new to advanced, I recommend looking into Scratch, Python, and C++ for the start.

Botley the coding robot is designed to help kids to learn STEM skills while playing and having fun. It best suits kids age 5 and above.

Botley offers a screen-free coding experience. Kids learn to control the robot by entering codes to the remote control and the robot will execute the commands accordingly. The Botley robot is capable of detecting and avoiding objects in front of him, it can be programmed to take on obstacle courses or follow a black-line path.

The Edison robot is widely used by schools and parents to teach kids to code. It is affordable and highly customizable.

You can program Edison robots by scanning the barcodes provided. The barcodes are pre-set programs that can be used to control the robot.

Alternatively, Edison robots can be programmed from a computer or tablets by using Edison’s programming languages:

The benefits of learning code with robots

Before we look at the benefits of using coding robots, let me clarify something.

Now let’s look at the benefits of using coding robots:

Robots are engaging and motivating. It offers more than coding. Different from on-screen coding, kids see the result of their programs in the real world. Robots provide tangible and instant feedback to them.

Students learn to identify and solve problems during the process of designing control robots. This helps to grow their problem-solving skills and learn to be persistent.

Robots give young coders clear and concrete feedback about their programs

A robot follows the instructions given to it. It shows the result and problems of your program. Students are challenged to solve the problem right in front of them. This makes learning effective and fun.

Working with robots is a hands-on experience. It puts programming theories into practice, this helps students to understand coding concepts and application in depth.

In the classroom environment, robotic projects help children to work together. Not only will they gain coding skills, they learn to communicate, express themselves, and work as a team.

In addition to the Botley Robot and Edison Robot, here are a few recommended coding robots that are suitable for kids:

JIMU Robot is a buildable, codable, and humanoid robot. It is a little dancing machine!

Bit coding robot is a pocket-sized robot designed for beginners coder ages 6+. It allows both on-screen and screen-free coding.

Kids can start coding screen-free with strokes of a marker, the robot is smart enough to respond to the commands.

Bit coding robot is also programmable by OzoBlockly, a drag-and-drop block-based coding language similar to Scratch. Children can use OzoBlockly on a computer or tablet, then load code to Bit by holding the robot to the screen.

LEGO Mindstorms Robot Inventor is a powerful STEM toy. It allows kids to learn STEM skills while they build, code, and play with remote-control model robots.

Kids build Mindstorm robots to take on activities and missions using the Scratch-based LEGO Mindstorms Robot Inventor App. The robot set comes with an LED screen, 6-axis gyro, speaker, powerful motors, and accurate sensors. All these give children all they need to build their own awesome tech toy. Besides, they can share their creation online on LEGO Life.

Mochi Robot is a screen-less coding toy designed for kids ages 3-9. It helps to develop the critical thinking and computational logic of kids.

With Mochi Robot, children learn at their own pace and challenge themselves by designing characters and experimenting with coding commands.

Dash Robot by Wonder Workshop is a coding toy that makes learning to code fun for kids. It is a real robot that can respond to voice commands or apps. Kids can give voice commands, use picture-based coding language, or code with Blockly coding blocks.

The robot can sing, draw, and move around. It lets kids explore coding concepts like loops, events, conditions, and sequences.

Dash robot can start at any skill level and grow from there. The robot can grow right along with kids with additional attachments from Wonder Workshop. The attachments provide more challenges for growing kids.

Wonder Cue Quartz is a sophisticated learning robot for kids ages 10+. It offers something for beginners and advanced coders alike. There are 3 ways to learn to code with Cue robot:

The robot offers flexibility for kids to create and control. The built-in interact AI enables the robot to chat with you and respond to instructions. Cue robots can grow with your kids and take coding to the next level.

CodingNemo.com is a participant in the Amazon Services LLC Associates Program, an affiliate advertising program designed to provide a means for sites to earn advertising fees by advertising and linking to Amazon.com. We may earn a commission when you buy through links on our site. See the full disclaimer for details.